Who holds who's debt in Europe?

Nice visual applications in the Washington post that lets you see the loans different countries extend to each other. I have to say that on the basis of these numbers I do not find it convincing to argue that Germany's banks were too exposed for the German government to allow Greece to default... at 1.4% of German's GDP extended as loans to Greece, this is hardly a big deal. 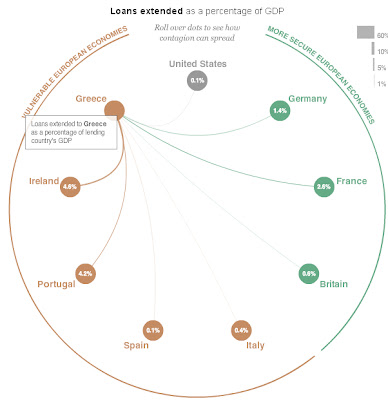 What is more convincing is that an Irish and/or Spanish default would be much more painful indeed. Germany and Britain have more than 5% of their respective GDP extended in loans to Ireland and France has about 7% of GDP in loans to Spain. Obviously Ireland and Spain interact given that Ireland has about 14% of GDP's worth of loans to Spain. 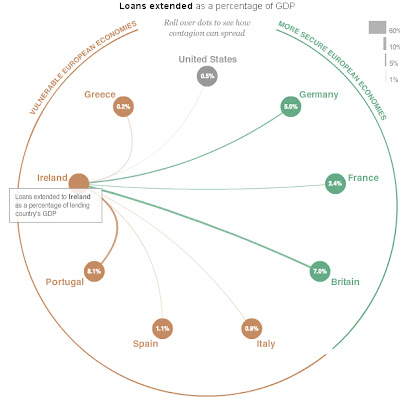 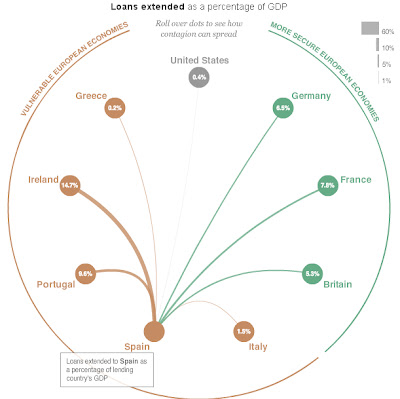 Now what I find truly amasing is the value of loans made to the US: Ireland and Britain's loans to the US are worth more than 50% of their respective GDP, equivalent numbers for France and Germany are lower but still above 20%... 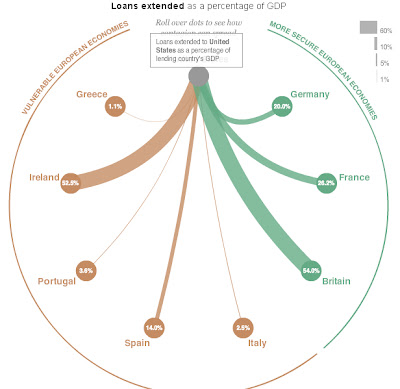 ﻿UPDATE: a good friend of mine working at the ECB raised a good point concerning the figures used by the Washington Post for Ireland. He argued that these are figures are probably taken from the BIS website. "However these figures give a rather misleading picture of the true nature of Irish public and private debt. The high numbers in the BIS dataset reflect the activities of international banks that have operations in Ireland and who do not have a role in the Irish domestic financial system." Thus, this graph should be interpreted with caution. Anyone interested on this specific issue can see: http://ftalphaville.ft.com/blog/2010/12/07/429141/bis-wars-over-ireland/
﻿
Email Post
Labels: Crisis Europe Fiscal policy