A nice post by Krugman following up Rampell "Why many rich people don't feel very rich" post. In a nutshell they argue that people in the top 10% income bracket feel middle class because the top 1% or top 0.1% are so much richer than they are. Obviously they're talking about the US context, so I wondered how the top 10% in Europe fare relative to the bottom 10%. 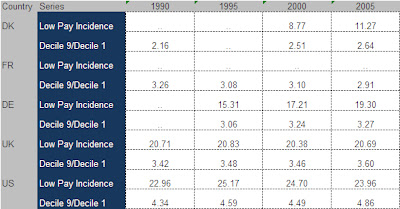 A quick look at deciles data from the OECD confirms that the ratio of the top to bottom incomes is not that different in the US and in countries like Germany and France. The incidence of low pay is also similar in continental countries and the US, while Denmark has about twice less low pay incidence than the US.
In fact, the Gini coefficient before taxes and transfers is not that different between the US and European countries. It has increased in all countries under consideration in the table below since the mid 1980s. It is striking that before taxes and transfers the Gini is higher in France and Germany than in the US! That's where the welfare state kicks in and results in much lower levels of inequality after taxes and transfers in Europe than in the US. Denmark has managed to keep net inequality virtually unchanged since the mid 80s while France has even decreased it.