It's interesting that liberalisation of trade is often seen as an ideal most forcefully defended by liberal countries such as the US. Though it is true that in rhetorical terms liberal countries have advocated for more globalisation of trade, the empirics tell a different story. The figure below* carries that point graphically. On the Y axis there is spending on Active Labour Market Programs (ALMPs) expressed as a percentage of GDP in 2001, while the X axis displays the log of the average share of external trade in GDP for the period 1970-1999. 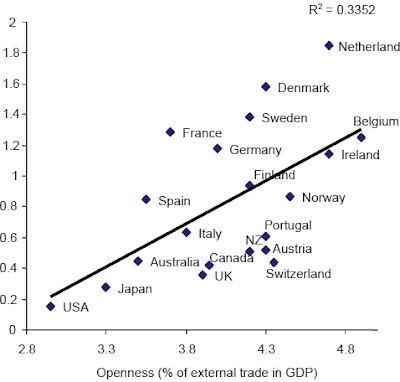 First, countries which are often portrayed as more social democratic (Scandinavian countries) and/or less liberal (Belgium, Germany) than the US have de facto much more open economies.

A second finding is that there seems to be some correlation between the degree of openess of a country and how much they spend on ALMPs. This is not surprising given that the latter policies facilitate the reallocation of labour that openness may call for.

*The graph is taken from the presentation slides "Active Labour Market policies around the world, Coping with the consequences of globalisation" by a reference in this field of research: Peter Auer, chief employment analysis and research at the ILO.
Email Post
Labels: Debates in economics The rise of the welfare state