Think developed countries have more women in Parliament than the rest of the word? Think again.

The data in the table below (extract taken from this table) has been compiled by the Inter-Parliamentary Union on the basis of information provided by National Parliaments by 1st April 2013.

Out of the top 30 countries, only a few - predominantly scandinavian countries - are present, namely: Sweden (4th), Finland (7th), Norway (11th) and Denmark (13th).

Iceland (10th), the Netherlands (14th) and Belgium (17th)  are other noteworhty exceptions. The US ranked 78th with 17.8% and 20% of women in the lower and upper houses, respectively. To put this position in perspective, that's below Kazakhstan, Iraq, or Lesotho (which is ranked just below France).

The UK is ranked 58th in a tie with Pakistan. In the EU, Hungary (119th) ranks particularly poorly, being ranked just after the Democractic Republic of Congo.

Of course, presence in parliament is not everything and does not necessarily correlate highly with other measures of gender equality (for other measures such as share of women on boards, see this great website by the OECD). That being said, I think it's hard not see it as an abysmal failure on the part of advanced economies to ensure gender equality in political representation. 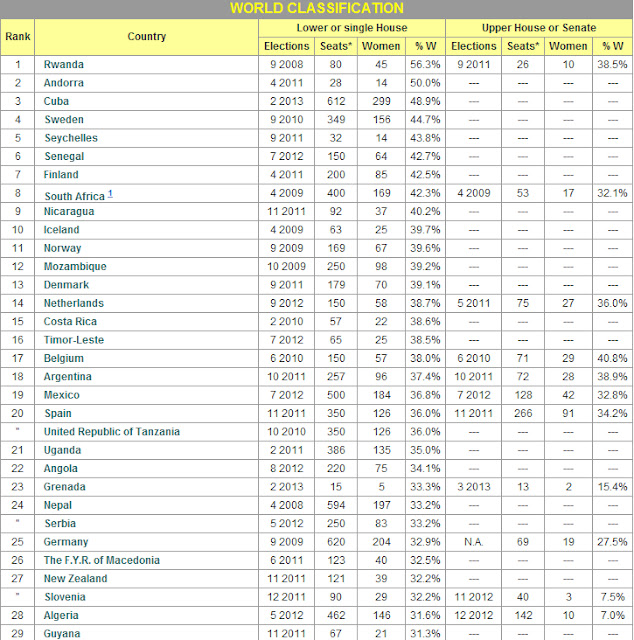