Beyond Strauss-Kahn: Facts on the prevalence of rapes in France

Unless one was lucky enough to be stuck in some Island with neither electricity nor newspapers for the past couple of weeks, one cannot help but be fed up with the Strauss-Kahn trial that has spread like a virus across much of the media.
Clearly what's important about this issue is not the affair itself, but the underlying social phenomenon that it is located in. In France it had the fortunate effect of attracting attention to France's inability to tackle this issue effectively. Partly, this stems from the difficulty to prosecute those who commit rapes.
This in turn is first and foremost a result of the low percentage of victims that press charges. After reading for the tenth time that only 10% of women that have been raped report it to the police, I got curious as to where this statistic comes from and what other statistics are available.
Thankfully, the INSEE (the French office for statistics) carried out a study in 2007, so we do have some reliable data based on a sample of 17,500 households. Some background information regarding the details of the process can be found here.
The graph below shows the percentage of women victims of different types of violence and how age affects this percentage. For instance, almost 2% of women between 18 and 29 years old have been victims of rape outside the household. Note the fairly high exposure of women of all ages to many other types of violence in France. 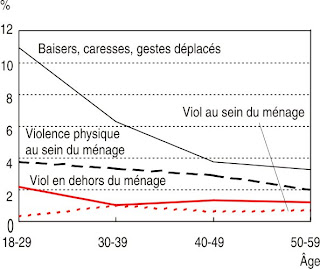 How often are these rapes reported? The table below shows the reporting rate of different types violence. For instance, 12.1% of women that are raped outside their household press charges.
To this must be added something that is actually quite peculiar, called a 'main courante', involving 5.4% of the rapes. This basically involves the reporting of a rape to the police but without pressing charges. The facts are 'registered' by the police, but that's it.
Though the crime is therefore rarely reported, I found it impressing that 47.4% of the victims have talked to a friend of relative. Only 12.2% of the rape victims (where the crime was committed outside the household) do not talk to anyone This increases tremendously when the rape is committed within the household by the husband: 32.6% of victims do not talk to anybody and only 5.6% press charges!

Who commits the crime? As is well documented, it is mostly people who the victim knew.  22.6% of rapes are committed by the ex-partner of the victim, 2.1% by a member of the family, 16.1% by a friend.

But this does not mean that 'closeness' increases the overall likelihood: 29% of rapes are committed by people who the victim knew but are not friends or relatives. Thus, about 59% of the rapes are not committed by family, friends or ex-partners. 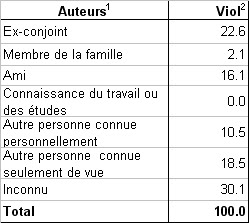