Unemployment, atypical work and employment policies in France before the crisis

In the fifteen years preceding the crisis, unemployment had been falling to reach about 8% in 2007. This reduction was done against the backdrop of a rise in the share of employees on temporary contracts and a persistently high share of employees on part time contracts. It is interesting to note in this respect that unemployment was reduced without shifting unemployed workers into part time contracts.
This does not mean that part time employment is unproblematic. Indeed, by 2008, about 27% of part time employment was involuntary and there are good reasons to suspect  that this underestimates significant issues related to atypical work contracts such as lower average salaries and entitlement to various social benefits. Thus, in France policy makers have been faced with the dual challenge of addressing existing precarious jobs and dealing with a persistent unemployment problem without increasing precarity.
While active measures are often seen as an important element of any strategy to tackle persistent unemployment, one would find it hard to relate the fall in unemployment to any surge in this measure which has fallen overall. It would be hard to control for the actual intensity of aggregate active spending which requires taking into account the number of unemployed that are targeted by the the measures. Notwithstanding this bias, if the fall in aggregate spending on active measures was due to a reduction in the number of unemployed then spending on passive measures (Unemployment benefits) would have experienced a similar reduction. 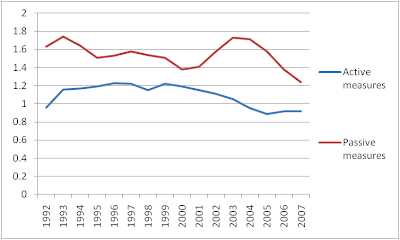 Another problem with aggregate measures is that they hide potentially relevant changes in the allocation of money to different programs. It is therefore interesting to look at the distribution of active measures accross the different measures that can be implemented: Public Employment Services (PES) and administration, training, Employment Incentives, Supported Employment and rehabilitation, and  Direct job creation. It is clear that the distribution within active measures has changed: training expenditures have decreased, while direct job creation expenditures increased along spending on PES. The 1990s were also marked by an increased focus on employment incentives which did not prove long lasting. 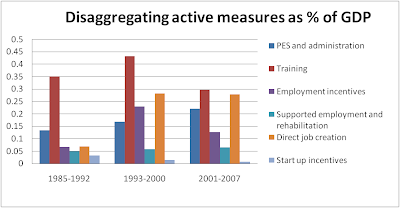 However, if higher spending on direct job creation, employment incentives and PES are responsible for the fall in unemployment. This raises a number of questions: why are we unable to foster good jobs and why have we observe reluctance to extend job creation programs since the onset of the crisis? We also spend more on administration than on employment incentives and supported employment and rehabilitation which is not necessarily an ideal allocation of funds.
Email Post
Labels: Labour market