Downsizing in Cuba: Is public sector employment that detrimental to national income?

In a recent article in Le Monde one learns that Cuba is about to eliminate 500,000 posts in the public sector which currently employs 85% of active labour force. In a rhetoric that has now become mainstream, the move was justified by stressing the sub-optimal support given by the state to unproductive activities, allocation problems in the labour force, and so on. Fidel's brother went as far as saying: "we must eradicate for ever the idea that Cuba is the only country in the world where one can live without working".
As it is always good to go back to the basics, I wondered what was the empirical link between the number of public sector workers and a nation's income per head. Let's consider public sector employment as a share of total empoloyment relying on ILO data (the data is a bit old - mid to end 1990s - but the main point remains. A casual look at a selection of 15 OECD countries reveal some striking things. 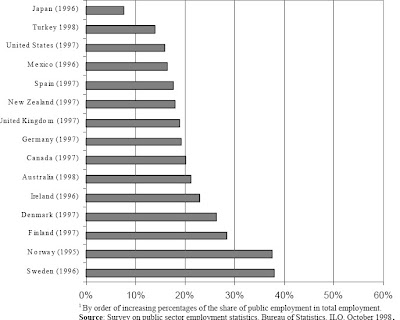 The first four contenders are, not surprisingly, located in Scandinavia (Sweden, Norway, Finland, Denmark), they are also located in the first fifteen richest nations as measured by GDP per capita at nominal exchange rates. The 'liberal' anglo saxons nations, save for the US are around 20%; Australia and Canada have more public sector employees (relative to total employment) than Germany while Japan has less than 10% public sector employees.
But one may be forgiven for raising the following point: sure, some rich developed countries can afford big public sectors, but surely to get to that point one ought to minimise the inefficient public sector, right?
To answer that question, let's focus, for the sake of parsimony, at emerging BRICs (Brasil, Russia, India and China). For starters, China had in 1996 about 36% of its employment in the public sector and the figure for India (formal employment; only public sector and private enterprises with more than 10 employees, excluding agriculture) was so large that my first reaction was to think that I was misreading the table: 70%! Brasil did have a fairly low share of employment in the public sector of about 10% while Russia was close to 37% (including public employment in government and the enterprises and organisations owned by the state).
Clearly, this a very crude analysis: it is neither exhaustive in its selection of countries and ignores the time dynamics, nor does it control for other relevant factors; but even at such a simplistic level one seriously questiosn the validity of an assertion regarding the size of the public sector that is often taken as an established fact.
Email Post
Labels: Public sector