The crisis of legitimacy of the UK welfare state

The ongoing austerity agenda in Britain seems puzzling until we look at social attitudes and how they have evolved over time. This is precisely what the British Social Attitudes survey allows us to do by monitoring people's views of a variety of topics. It asks a random sample of 3000 people a series of questions since the early 1980s.

The analysis of their questions related to the welfare state reveals a striking crisis of legitimacy. The share of those that think unemployment benefits are too low fell from above 50% in early 1990s to less than 30% after 2010. This occured alongside drastic reductions in the unemployment benefit replacement rate (which measures the % of income that is replaced by unemployment benefits).

This is surprising on two counts. First, assuming some degree of redistributing effects of welfare state policies, and given that the median income is under the average income, we would expect that it is beneficial for more than one third of people to favour redistribution, and by extension welfare spending.

Second, the crisis has - at least initially - increased unemployment and insecurity among workers, two issues that welfare state policies are supposed to address. One solution to this puzzle lies with the fact that people believe cutting the welfare state would incentivise unemployed people to find jobs. Indeed, in the early 1990s, less than 30% of respondents agreed that a less generous welfare state would encourage people to 'stand on their own two feet'. By 2010, this was above 50%.

At a time where fiscal pressures are seen - rightly or wrongly - to be significant, this low public support limits the electoral attractivness of policy proposals to expand the welfare state and strengthens the political viability of austerity. 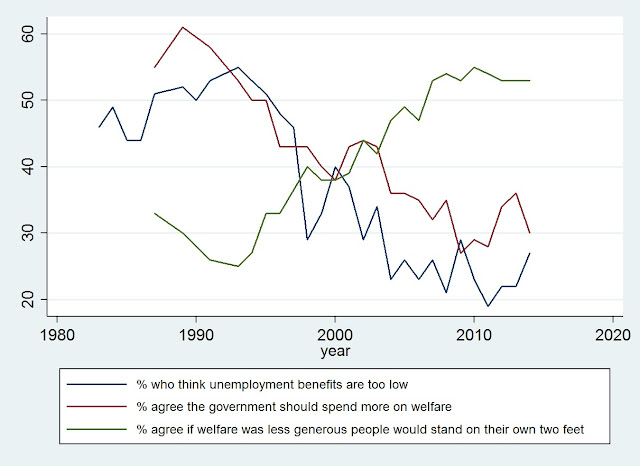