Welfare regimes and Youth Unemployment rates in the crisis 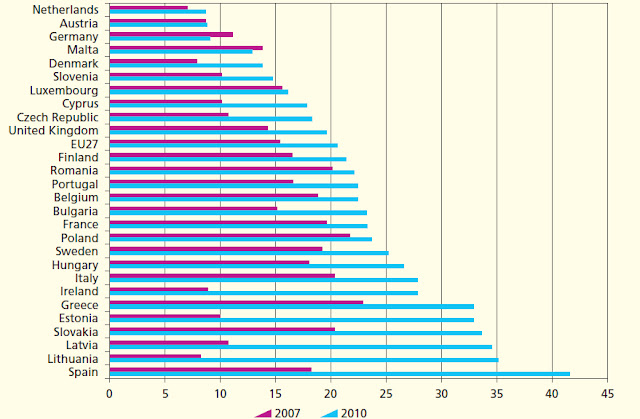 Whereas before the crisis most countries had youth unemployment rates between the 20ish % and the 5-10 % range, the vast majority of countries have seen this rate go above 15%. Coordinated Market  Economies have fared better: Netherlands, Austria, Germany, Denmark; but also Malta managed to stay under 15%.
Most countries have added 5 to 10 percentage points to youth unemployment rate following the crisis, some have seen this rate double! More than 30% of the youth is now unemployed in Greece, Estonia, Latvia, Slovakia and Lithuania, and more than 40% in Spain!
Interestingly, most Bismarckian welfare regimes fare decently, the worst outcome among this cluster is France. In line with what Sapir had noted with respect to the equity and efficiency of the system, the Southern Welfare regimes fare worst with respect to unemployment rates.
High and persistent rates of youth unemployment will depreciate skills, generate social exclusion and ultimately reduce future fiscal revenues and growth prospects. How to adress this issue is likely to remain one of the biggest challenge of European welfare states in the near future.
Source: Report by European Foundation for the Improvement of Living and Working Conditions
Email Post
Labels: Debates in economics Labour market Welfare state outcomes