The crisis: Deficits as the temporary fix in the tensions between legitimation and accumulation

Drawing on Claus Offe work (e.g.: contradictions of the welfare state, 1984) on the contradictions of state functions in stabilising the capitalist system, one can conceptualise the current crisis as the realisation of inherent contradictions. The state fulfils two key functions: one of legitimation and one of accumulation. 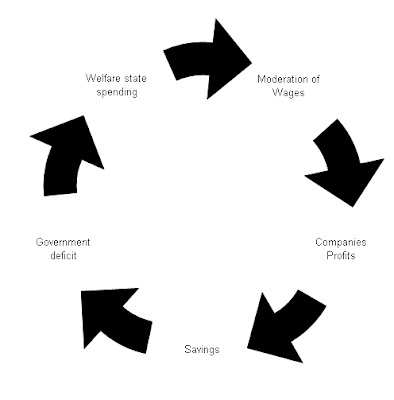 In its legitimating role, the welfare state can compensate, insure and protect workers of vagaries of the market system. Hence, we have witnessed a dramatic expansion of welfare state spending under governments of both the right and the left in the past three decades. This makes the capitalist system legitimate.
In its accumulating role, one finds the traditional tools of Keynesian demand management, of providing public goods, and of expanding the welfare state so as to promote the moderation of wages. This fosters accumulation of the system (i.e.: rising profits).
The contradiction arises from the fact that the legitimating role requires raising revenues through taxation, which would ultimately hinder the accumulation.
One way the state bypasses this problem is by running deficits, which are themselves financed by the savings generated by Companies' profits. This deficit makes it possible to legitimate the system through aditional welfare state spending. This extra spending has the added benefit that it makes it possible to further moderate wages. This is essentially what has happened in the 1990s, where social pacts involved exchanging wage moderation for welfare state benefits or tax cuts (See for instance Rhodes on social pacts).
The result is that we have witnessed a fall in the wage share (that is, the share of the GDP that is allocated to income from labour - see graph below). 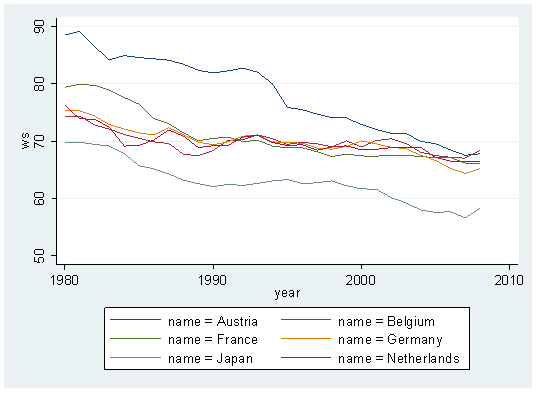