Does the case for Austerity in France resist closer scrutiny?

Many European governments are currently considering or have already implemented so called austerity measures.   is not exception and the current government has announced its will to implement ‘necessary adjustments’.
The current crisis’ impact on fiscal budgets is thereby used to justify significant cuts in several parts of the public sector and the welfare state. These cuts are necessary, we are told, to restore credibility. It is hard however not to see in these attempts a mere pretext used to advance already familiar ideological agendas of the political right. What, if anything, in the current crisis warrants this emerging dogma? Using the case of , I argue that there is a confusion between the symptoms (fiscal deficits and debt) and the cause (economic crisis), addressing the former instead of the former is likely to aggravate the problem
When comparing the impact of the current crisis on the French GDP with that of previous ones, (see figure below) it seems indeed true that it has been more severe than the crisis of the mid 1970s and that of the early 1990s. By the third quarter of 2009, the economy having lost about 3.5 percentage points from its level in the first quarter of 2008, started to grow again. We are now a mere 3 percentage point lower than before the crisis.

Does this situation then requires drastic austerity measures? Comparing the French situation with other big European Member states illustrates quite clearly the resilience of the French economy to the crisis (see figure below). Indeed, , the and have experienced much larger falls in their GDP since the onset of the crisis. However, as French GDP has not reached its pre-crisis level, contractionary changes in policies seem premature.

In addition, the evolution of French debt is neither a cause for worry in the short term nor particularly problematic in comparative perspective (see figure below). The situation in the French labour market is also particularly problematic, often more so than in other big European Member States (see figure below). What is required therefore is not austerity but policies to tackle the unemployment problem, which will ultimately create problems of fiscal sustainability and economic recovery. 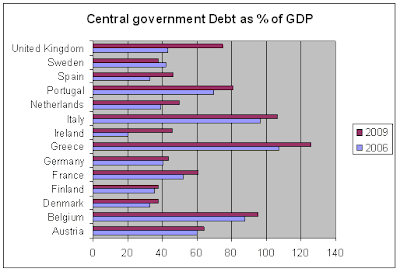 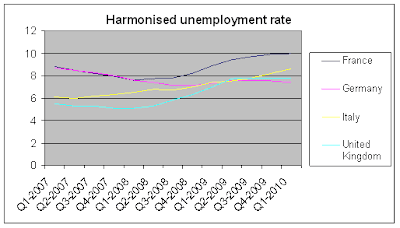