Who will foot the bill? Distribution of EFSF commitments 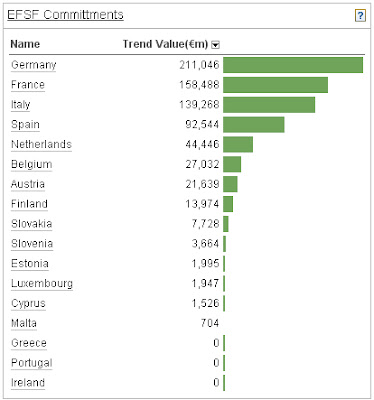 The KPI library collected various data from Eurostat, OECD, IMF, Worldbank and plugged it into a cool visualizer. Germany is by far the main contributor, followed by France, Italy and Spain.
Per capita contributions though look a bit different with Luxembourg, Netherlands and Finland coming first (3855, 2,677 and 2,599, respectively). Germany still comes fourth and France fifth.
As a % of national GDP, the first three biggest contributors are... Estonia, Slovakia and Malta (13.9, 11.7 and 11.4%, respectively). Germany only comes in 8th position.
German solidarity should therefore be put into perspective... In any case, the consensus seems increasingly to be that the EFSF won't cut it... To the extent that there will not be any major overhaul of the degree of EU integration or the introduction of a system of fiscal insurance, only the ECB can save us now...
Email Post
Labels: Europe Financial markets Fiscal policy Useful