Robert Lucas on the crisis: causes and consequences

Interesting set of slides; I particularly like that one below, which basically shows that in terms of GDP deviations from trend we're still far from the 1929 slump. I agree with Lucas that the role of monetary policy, though politically unpopular, avoided the worst of the crisis. However, his contention that governments are now to blame seems pretty far fetched to me. The basic idea, based on perfect rationality of agents, is that the US government potential plan to raise taxes on the rich has an adverse effect on the expectations of these agents, which then feeds into lower investment decisions, etc. 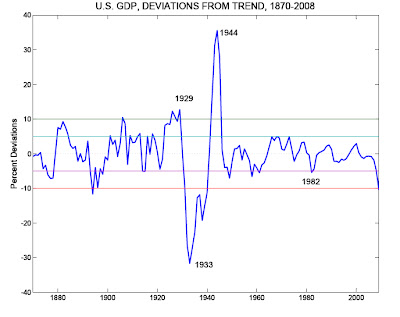